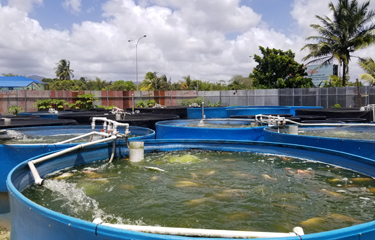 Trinidad and Tobago, the country acknowledged as one of the region's economic powerhouses, has been experiencing the same downward trend in its aquaculture sector seen in its less affluent neighbors.

Whereas Latin America's share of aquaculture production had doubled between the early 1990s and 2014, that of the Caribbean had fallen by more than half during the same period, according to the Food and Agriculture Organization's “State of World Fisheries and Aquaculture 2016” report.

Though boasting that “between 2011 and 2014 was when the aquaculture sector in Trinidad had its greatest annual aquaculture production,” climbing steadily to around 50 metric tons (MT), Ryan Mohammed, the outgoing president of the Aquaculture Trinidad and Tobago Association (AquaTT), said  production has now slid “down to five tons per year.”

“We have a large proportion of farmers coming out of the sector indefinitely,” Mohammed told SeafoodSource. Of those still engaged in aquaculture, many are retirees and peoeple seeking to do tilapia farming “on a small scale in their backyard but still be commercial.”

“Others are in a state of stasis waiting to see if there is a sustainable reason to go back into aquaculture,” Mohammed said. “But by and large there is a net movement out of aquaculture.”

Mohammed attributes the woes of his country's aquaculture sector to “the lack of an enabling environment.” He identified the cessation of tilapia processing by the state-owned Sugar Cane Feed Centre, the only viable processing facility available to aquaculture farmers, as being a major factor in the downturn of the industry over the past few years.

Back in 2012, concerned about the problems the sector was facing in regard to processing and marketing its product, the AquaTT Coop approached the then-minister of agriculture, land, and fisheries with a view to finding solutions. Subsequent meetings with the government led to an agreement in 2014 with the state's Sugar Cane Feed Centre, which already did processing of livestock. Under this one-year agreement, several farmers would receive contracts for them to supply fish to the center for processing. The government gave a grant of TTD 1 million (USD 147,220, EUR 119,246) to enable retrofitting of the center for fish processing, including provision of packaging machines, vacuum sealers, printers for labels and freezers, as well as agreeing to meet other expenses incurred under the agreement. A wholesale price for selling the fish to supermarkets was also determined.

“It was a long teething process, in excess of six months,” Mohammed said. “The fish would stay on the supermarket shelves for a month and the supermarkets would say take it back. But the public started to be aware of our product. Eventually, the supermarkets got comfortable with it. It took six to eight months to get it started, but we factored all that into the budget.”

As the agreement drew to its close, the AquaTT Coop approached the government asking that the agreement with farmers to supply fish for processing should continue for another year.

“During this time, the co-op would move toward completing the registration of the TT Tilapia brand so it is owned by the farmers, and commission our own processing plant with the aim that there will no longer be a reliance on government to process fish and the contracts the government had with the farmers would go to the co-op,” Mohammed said.

However, following national elections in September 2015 and a change in government, the contract with the farmers was not renewed, Mohammed said.

There were “a plethora of reasons why those arrangements were terminated, including inability to supply consistent amounts of quality fish, accountability issues, and the fact that it was just not economically sustainable to do so,” said Paul Gabbadon, a fisheries and aquaculture advisor to current Minister of Agriculture, Land, and Fisheries Clarence Rambharat.

Further, “There were many problems with farmers and agencies acting as middlemen (among them AquaTT) in not being able to provide required amounts for processing (less than 1,000 pounds [0.5MT] in some cases), inability to provide consistent sizes (varying size ranges) as well as poor quality fish in some cases,” Gabbadon told SeafoodSource via email. “There were also some issues with the guaranteed price and prevailing market prices, including imports of tilapia fillets. Some of the issues such as inadequate fingerling production were addressed, primarily by private hatcheries.”

He also noted that three private-sector groups, including AquaTT, the Tilapia Growers Association, and the Tilapia Hatcheries group, along with individual farmers, were representing the industry in Trinidad and Tobago.

“A lack of cohesion and consistent organization has prevented them from being a unified voice for aquaculture in Trinidad and Tobago,” Gabbadon said.

Despite the obstacles, AquaTT has been moving forward with plans to establish its own processing plant, according to Mohammed. But the association needs “to have a functional board” so it can get back to potential partners and creditors about arrangements for funding the facility, he said.

“One of the drawbacks of the board [is that] some are farmers, some involved in other things. So the board has fallen by the wayside,” Mohammed said. “We have a dysfunctional board and legally I cannot make decisions [on my own].”

Mohammed said an annual general meeting of the board was being arranged to regularize its status.

Nevertheless, for aquaculture to overcome the slow pace of development and critical challenges faced in Trinidad and Tobago, significant changes in approach are required, Gabbadon said. Primary among those is an input of private investment in the form of public-private partnerships or independent investments with or without government support, he said.

“This is a huge opportunity for sustainable businesses that can make excellent returns and penetrate new markets,” Gabbadon said. “Whilst there are opportunities for small-scale aquaculture and aquaponics, the mindset of ‘backyard farming’ and artisanal farming as the only way forward must be changed.”